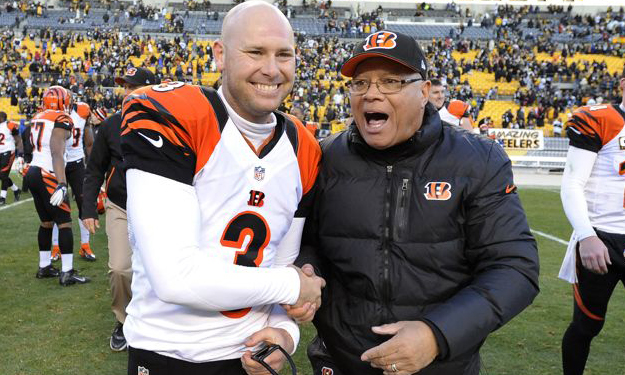 After eight years of preparing players for what he calls this week’s “Underwear Olympics,” trainer Clif Marshall realizes the NFL draft process has delicate dance partners.

There is the brute reality of the prospect’s college tape. Meanwhile, the NFL Scouting Combine that opens Wednesday in Indianapolis supplies sheer data that is seductive and dangerous eye candy for scouts.

The Bengals will tell you the tape of past performance on the field rules the day by as much as 60 to 75 percent when it comes to ranking players. Maybe more. And they’re not alone.

So Marshall knows combine training has to have a balance. One of his prospects once shattered an all-time combine record for every position and ended up on five practice squads.

That’s why this year he welcomed former Bengals running backs coach Jim Anderson to his stable at the Cincinnati-based Ignition APG workout center in Mason, Ohio.

Anderson saw it all in his 29 seasons with the Bengals, a historic stretch spanning the 1984 trade for James Brooks and the 2013 scouting of Giovani Bernard.  He watched the combine grow from a mass, Army-like physical to a choreographed event.

“Some of the guys (at the combine) can win an Academy award. They’re looking for an Oscar. You have to be yourself,” Anderson says of trying to interpret the intangibles. “Some guys have numbers off the charts, but they don’t play like that. That’s when you go back and check the tape. You have to let your eyes be the judge. Don’t let your eyes fool you. Don’t let the numbers talk you out of how he plays.”

Marshall covets the advice he gives not only to his prospects, but to him.

“He helps me out because he brings me back to football,” Marshall says. “There are times I get caught up in the numbers of it. At the end of the day, that’s what it’s all about. Football. He brings everything back to football and away from “The Underwear Olympics. I’ve had guys break all-time combine records that didn’t last very long in the NFL. That’s why it’s a blessing to have Jim, a football guy, not strength or speed guy.”

The Bengals will tell you the biggest function of the combine is medical. It’s the first time the teams get exhaustive physicals on the prospects and while a guy can overcome a poor 40-yard dash time, he can’t beat a bad medical grade.

But there is balance.

Ignition is proof the maze of combine drills and interviews have helped players get drafted higher. You only have to look at the University of Cincinnati’s Connor Barwin in 2009, when he went from late-rounder to Houston second-rounder to a free-agent killing with the Eagles. Or even last year’s effort by Louisville inside linebacker Preston Brown that lifted him into the third round at Buffalo, where he finished his rookie year among the NFL’s tackling leaders.

But numbers can only take you only so far. The University of Cincinnati’s Jason Kelce has started 46 games at center for the Eagles since he came out of the 2011 combine, when he blew up the 20-yard shuttle with 4.1 seconds, a record for O-linemen that was wide-receiver fast.

In making tiny Ignition a big player in a combine training field that has mushroomed into a slick cottage industry the past five years, Marshall has had five prospects set combine records in the various drills, ranging from the vertical jump, to the L cone to the 20-yard shuttle.

“No matter what the teams say, they put value in the testing and the numbers and the way a guy runs and jumps at the combine,” Marshall says. “That’s why it’s become a multi-million dollar business training for the combine. Because agents know there is money to be made and money to be lost the next three or four days in Indianapolis.”

Anderson urges the 17 Ignition prospects with the same workman-like-every-day wisdom that sired the most productive backs in Bengals history. Happy to keep a hand in the game, he says, “It helps them and it helps me.”

“It comes down to preparation and competing,” Anderson says. “The youngsters have to be aware they have to make themselves accessible in a friendly way and they have to compete. The teams want to see how you carry yourself. It’s the most unique arena they’ll ever compete in. It’s the only time they’ll be in front of owners, general managers, head coaches, and the guys that coach their position. And they’re looking to see how they respond to that competition.”

Anderson thinks back to the great backs he scouted and “competitor,” is the word that keeps popping into his mind. He remembers the pro days at the University of Miami that produced Edgerrin James and how the players kept tabs on each other’s times in various drills and vowed to beat their teammates while also supporting them.

Corey Dillon, the Bengals’ all-time leading rusher, came out of school early and didn’t go to the combine. But when Anderson worked him out before the draft at the University of Washington, he saw the same kind of ferocity.

“He wanted to beat you at tiddylwinks,” Anderson says.

Scouts, he says, are also on the look out for sincerity at the combine.

When they do the vertical jump, do they take a short hop and a skip? If they’re lining up for the long jump, is their neck bowed back behind the line? Before the 40 (yard dash), instead of pausing, are they “jackrabbit starting?”

“It’s responding to coaching on the move. It’s how they compete, its how they finish,” Anderson says. “The thing to realize about the NFL is that attention to detail and improving your work and how you go about doing that work are things that set you apart.”

Louisville running back Dominique Brown has received Anderson’s message on the field, where Anderson got him before he went to last month’s East-West Shrine Game. He overhauled Brown’s pass-blocking technique and Brown says it’s a big reason he had a strong showing that week.

“Stepping with the wrong foot, taking away the inside,” Brown said of the fixes. “He says anyone can find a hole and hit the hole. If you protect the quarterback, you’ll find a way there.”

The 235-pound Brown is a bruiser who can catch and has been projected anywhere from mid-range to a free agent. Anderson got to Brown just in time because the pass protection stuff won’t help him at the combine and his upcoming workout on campus for the NFL, known as his pro day.

But what will help him at both is the work they do drawing up plays. Brown will be asked to do that often in the next couple of days in Indy.

“The board work helps drawing up the powers, how he ran them when he was at the Bengals,” Brown says. “That’s helped a lot. Say you have 24 power, you can run it 20 or more different ways. You’re just learning who pulls, who gets who.”

Anderson says how a prospect works on the board won’t make him or break him. Remember…

Seven of Marshall’s 17 are headed to Indy this week to do battle against the training conglomerates that have as many as 110 prospects, a third of the combine enrollment. Guys like Brown, out of Winton Woods High School, and Texas linebacker Jordan Hicks, out of Lakota, are local Cincy guys. A guy like Central Florida safety Clayton Geathers has a tie with cousins on the Bengal who work out at Ignition. ACC sack leader Max Valles, a Virginia outside linebacker, must have got the word that Ignition has taken tweeners and made them potential first-rounders.

But for the last few years, Marshall has focused on the Operation 53 theme. He said the best moment of the workouts this year so far came when Anderson and Bengals linebacker Vincent Rey arrived and didn’t talk about 4.3 40s, but improving every day so they could make the 53-man roster.   He felt that message coming from Rey, an undrafted rookie who became a key member of four straight playoff teams, is particularly powerful.

“We’re just not looking for athletes or football players to go up to Indianapolis and become superstars,” says Marshall, striking a balance. “We’re looking for guys to make the 53-man roster and have prosperous careers in the NFL.”