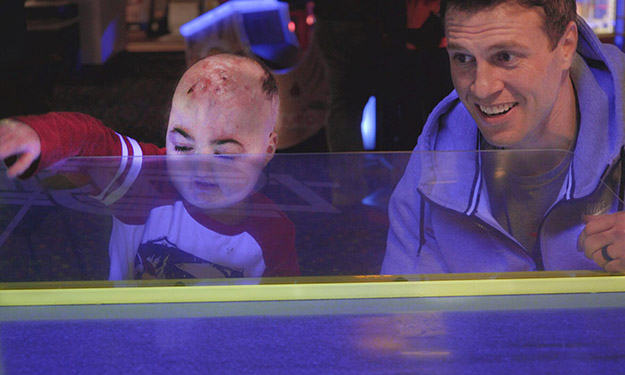 Mind, Body, Spirit. These are the three key components of athletic development at Ignition APG. In preparation for the NFL Combine, which begins March 2, Ignition has been training its athletes physically and mentally. And at the conclusion of training on February 1st, the athletes experienced a special event to ignite them spiritually.

Working with The Dragonfly Foundation, Ignition was able to spend quality time with children who are fighting the ultimate battle of cancer. The Dragonfly Foundation is a nonprofit that (a) provides distractions from the tolls of cancer and bone-marrow transplants as well as (b) establishes connections and community for patients and their families when they feel the most secluded. Spending time together was not only impactful for the children and their families, but also the Ignition training staff. Here are some of the quotes from the event from the Ignition staff and athletes.

“Thursday night was the most fun I have had since being at Ignition. It was great to see the smiles on those kid’s faces, and I had an even bigger smile on mine. It was a great night overall, and those kids and families will be in my prayers.” – Brett Kendrick, University of Tennessee

“Last night was a blast! It was an awesome opportunity to bond with kids who are stronger than I’ll even be and a great reminder to never lose you inner child; they have life figured out more than most.” – Derek Berry, Ignition Coach

“Having the opportunity to participate in an event with the Dragonfly Foundation was a fun experience. The children were great, and we all had an amazing time. The highlight was seeing the joy in the kids while we were there. Their smiles made my day.” – Trenton Cannon, Virginia State University

“Having the opportunity to spend time with the kids from the Dragonfly Foundation was a very eye opening experience. I had a lot of fun at Lazer Kraze and I felt like the kids enjoyed their time as well. It was very humbling to see how well the kids carried themselves while fighting different battles. I always thought that I had it rough with the small problems/adversity I deal with everyday, so when I participate in an event like this, I make a mental note to push through times of difficulty.” – Dontez Byrd, Tennessee Tech University

Ignition has partnered with The Dragonfly Foundation since 2013, providing experiences for Dragonfly families/patients to interact with professional athletes at Ignition’s facility. In addition, Ignition has taken its NFL Combine Training athletes yearly on a tour of the Dragonfly facility to hear its mission and vision and to be a part of Dragonfly’s annual laser tag event – which allows Ignition’s athletes to play with, encourage, and build relationships with the children.