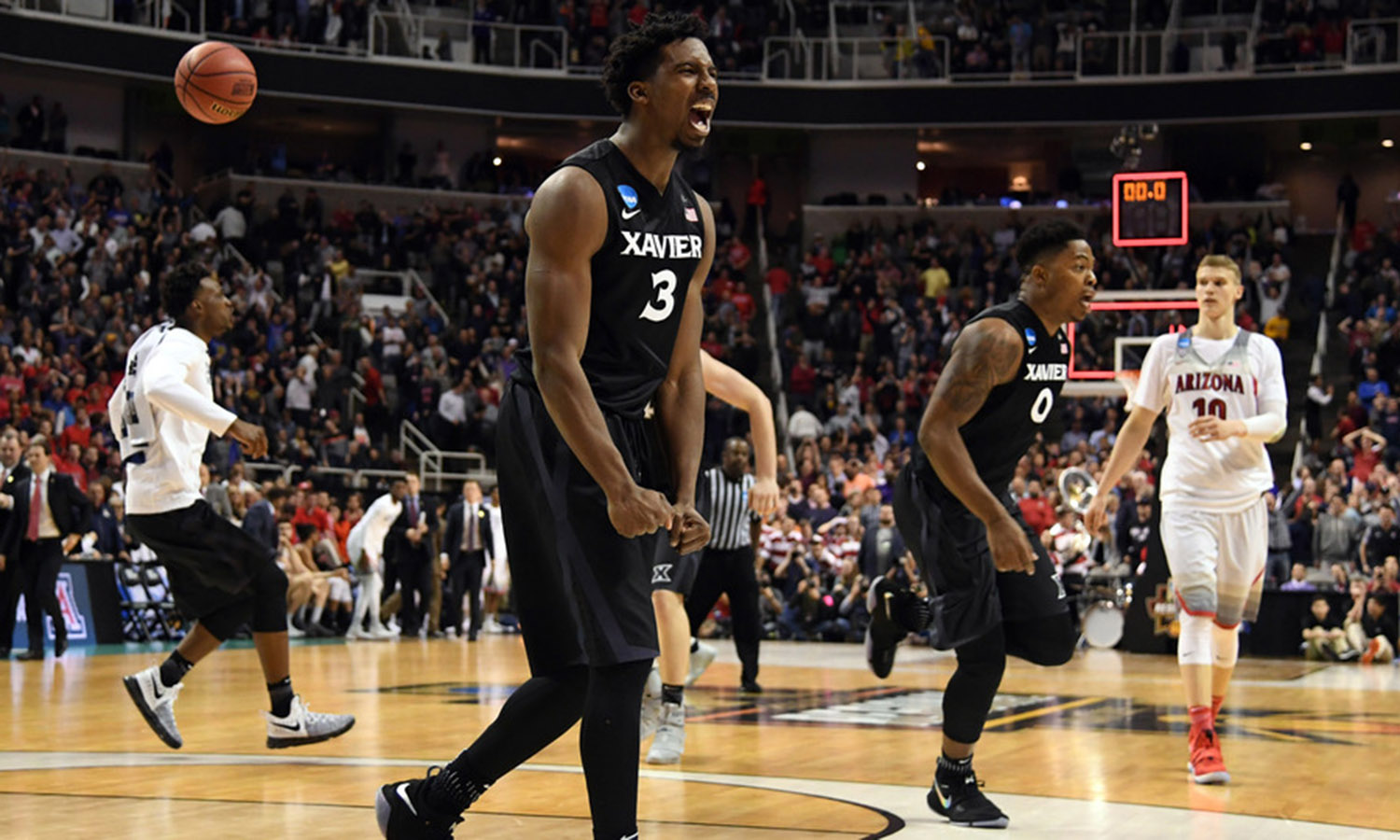 Sean O’Mara’s meaty, 6-foot-10 frame was never intended to be used for tumbling on recreational mats in the style of a Jiu Jitsu fighter, and yet there he was – face red, a thin glaze of sweat forming on his brow, hunched on the ground and laboring to tuck his left arm back toward his right hip in order to perform a tumble.

Xavier men’s basketball, for which O’Mara is a senior forward, has arrived at the Kohlhepp Family Auxiliary Gym for its 9 a.m. summer workout. Randal Burton, a Jiu Jitsu black belt and instructor at Gracie Jiu Jitsu in Blue Ash, is the acting head coach.

He’s probably not the only player that thought about passing on the exercise. All the players in attendance have been made to feel uncomfortable by these foreign body contortions that, to the untrained eye, have nothing whatsoever to do with basketball.

In addition to improving mobility, Burton said he’s re-training the players’ brains to show them they’re capable of the movements and, by extension, capable of achieving on the basketball court.

“To the outside world, the movements might seem awkward or goofy or even juvenile, but I’m trying to make these guys comfortable in hell,” Burton said. “Young, college-aged men – they want to be badasses, and they’re already studs on the basketball court. This is teaching them confidence in a new area.”

Chris Mack is nowhere in sight. In fact, Xavier’s actual head coach is out of town on a recruiting trip, but it’s just as well because this isn’t his time of year.

It’s the morning of July 26, which means it’s Matt Jennings’ time of year, his time to make his mark on Xavier basketball for the season to come.

Burton, who will make periodic appearances while Xavier’s in-season this fall and winter, is here as part a six-week summer program masterminded by Jennings, Xavier’s head coach of strength and conditioning.

The program is built to flex around the players’ summer studies, and it’s a rigorous, regimented, five-days-a-week haul of non-stop movement. It includes the requisite and expected time lifting weights in Xavier’s strength and conditioning facility under Jennings’ tutelage, but that’s just the beginning.

Burton, along with no fewer than six other third-party contractors from all around Greater Cincinnati, make up Xavier’s offseason program.

And what the offseason program is, as one of the contractors described it to The Enquirer, is one the most diverse programs of its kind in all of college basketball.

“Guys, remember. We’re trying to get uncomfortable a little bit,” Jennings tells the players as the tumbling drills carry on. “You’ve gotta push through that barrier. We can’t find out on Nov. 5 when someone gets uncomfortable, like, ‘oh man, this guy’s not a warrior now.’ You’ve got to push yourself to be uncomfortable right now.”

From the auxiliary gym, Xavier moves into the strength and conditioning facility. There, with thumping rap music blasting out of overhead speakers (“Keep Quiet” and “Rent Money” by rapper Future really get the guys moving) Xavier produces its best lifting session of the summer to date.

After Jennings gives a closing address at the end of the lift, he invites over Bengals wide receiver A.J. Green, who borrowed the facility for a private workout that morning.

Green introduces himself to every Xavier player and offers words of wisdom to the players, who hang on Green’s every word.

Xavier had a player selected in this year’s NBA Draft. Other players will make a run at the pro ranks in the future, but even these elite intercollegiate athletes are awed by Green, their mouths slightly agape as the NFL All-Pro star speaks.

For Xavier’s players, this is just another day in the Jennings-devised summer program.

After Green breaks down a Xavier huddle in the gym, Jennings hopped in his sedan to drive to the Kroger grocery store in Oakley. There, he procured a vast lunch spread specially prepared for his players by the grocery store’s top chefs.

The drive over is probably the slowest part of Jennings’ day, and he’s still hustling at around 60 mph on northbound Interstate 71 to get to the store. It gives him time to explain the purpose behind the many prongs of his summer program.

Jennings sees his primary job as advancing Mack’s overarching message to the players, which is mostly an emphasis on effort, especially when it comes to being in the weight room with Jennings.

Whereas most collegiate strength coaches are big on self-promotion, Jennings is as humble as they come. That might be his greatest strength.

Jennings isn’t on social media and he doesn’t parade around in Cintas Center on game nights.

He does the job he knows he can provide better than anyone for Xavier, and happily steps aside if someone else can impart knowledge to the student-athletes that he can’t.

Jennings’ humility is a key component of the Xavier program because it allows him to lean on some of Greater Cincinnati’s greatest athletic training minds.

Plenty of strength coaches would be too proud or set in their ways to invite someone like Burton to campus, but not Jennings.

Burton comes to Xavier’s campus, but that’s not the way it works with all the contractors. Some days, working with contractors means piling every member of Xavier’s consensus Top 25-ranked squad into unmarked, white vans and going for a drive.

On July 27, the vans first parked at Ignition APG in Mason. That day, Xavier did speed and agility work, along with some exhausting abdominal exercises.

Ignition also instructs Xavier on some elements of hand-fighting, which is applicable to the art of rebounding.

From Ignition, the vans travel a short distance to Artic Blast Cryo, a cryotherapy outfit in Mason that offers its full suite of services to the Xavier players.

Seniors J.P Macura and Kerem Kanter are two of a brave and select group of players to take the dive on full-body treatments.This entails the players stripping down to their underwear and stepping into a capsule that cools to temperatures between -190 and -270 degrees. The session lasts for no more than a couple minutes.

The guiding principle behind this kind of treatment, which is backed by some research, states that the body reacts to the flash-freeze in a manner similar to how it would react to hypothermia. This causes blood to stir and circulate, which eventually eases muscle soreness and improves energy levels, among other benefits.

Arms folded on his chest, Jennings smiles as Macura grits his teeth and laughs his way through his deep-freeze cryo session.

Among others, the third-party contractors include:

• Lori Allen Yoga. Allen served as a yoga instructor for Xavier this summer and is expected to continue working with the team in-season.

• Beyond Exercise Athlete Performance and Physical Therapy in Oakley. Founder and physical therapist Eric Oliver on July 28 administered movement assessments on Xavier men’s basketball to check for deficiencies in strength, mobility and other areas. The assessments result in a summary that helps athletic performance and injury prevention.

• Kroger in Oakley for lunch foods.

“We have some third-party contractors if you want to call it that, and it’s great to be at a university where they support that and give you the resources,” Jennings said. “It lets us tap into a lot of people around the region.”

AT HOME IN THE WEIGHT ROOM

At his core, Jennings is a man of the weight room. His office is situated inside Xavier’s strength and conditioning facility, just between the “fuel station” – a wholesome snack and smoothie bar for the athletes that’s complete with bar stools and TV’s blaring ESPN – and a closet full of low-calorie, flavored waters.

Jennings’ father was in strength and conditioning, and Jennings himself honed his weight-lifting prowess during his collegiate football career at North Carolina where he was a center for famed coach Mack Brown.

Strength coaching stops at the University of Tennessee, Wake Forest, South Carolina, and an internship spell with the NFL’s Tampa Bay Buccaneers would follow.

It’s Friday, July 28, around 5 p.m. in the strength and conditioning center, and Xavier has just broken camp on a week of summer training under Jennings.

There’s another week of training to go before a short break prior to the start of fall semester.

The players are leaving for the weekend – “see you never!,” Macura says with a wide grin as he flees the weight room – but Jennings isn’t going anywhere. He’s working up a sweat as he makes one final pass through the room before closing up shop.

He’s re-racking weights and turning the dumbbells with customized “X” brand marks upward, ensuring everything is just so.

The size and scale of Xavier men’s basketball program dictate that Jennings spend most of his time around it, but he makes time for each of the university’s teams, even if they don’t realize it.

“We’ve got some baseball recruits coming in tomorrow,” Jennings said as he slots a pair of massive dumbbells into their grooves on a rack. “Place needs to look half decent.”

On the basketball court, men’s basketball players answer to Mack. But here, in the strength and conditioning center, Jennings is the unquestioned head coach. His word is law, and the laws are simple to abide.

This is what Jennings knows best: Health, safety and wellness, and achieving those aims via the tools in the weight room. Mostly, Jennings’ lift program is based on five key body actions: Push, pull, carry, incline, squat.

There’s a rhyme and reason to it all. That also extends to his organization of the outside contractors and the entire summer program.

“Variety can kill you sometimes,” Jennings said. “In the weight room, we want to be good at the basics. This is an effort-based program and the basics have worked here for decades. It’s real simple. I don’t try to be my own coach or motivational guru. I try to come up with something that stays in line with the program philosophy, and there’s no interpretation – it’s (Mack’s) message. I can’t interpret that.