LEARN THE TECHNIQUES TO OVERPOWER THE COMPETITION

Quick hands and feet, change of direction, anticipating the opponents move, evading – these are all skills that can be broken down and rehearsed through the Ignition Hand Combat Program. Ignition Hand Combat Coach, Ben Creamer has been implementing principles of Kung fu, boxing, judo, and ju-jitsu in a specific way to NFL athletes for more than seven years. With specificity to each position, Coach Creamer works with athletes to improve their one-on-one maneuvers. Receivers will focus on getting around a jam without losing time or space. Defensive lineman and linebackers will perfect their strikes, evasions, and countermoves. 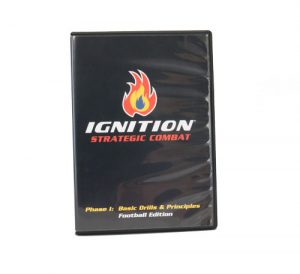 TECHNIQUE
All of the drills are a collaboration of knowledge, techniques, and principles from some of the best athletes, coaches, and martial artists in the world. The feedback given over the years has helped the program fine-tune football specific moves by breaking them down into practicable and teachable drills. Even though many of the drills do not entirely mimic the exact movement on the field, the reflex and pattern are ingrained early on to ensure unconscious competence is reached. Progressions are then made in intensity while taking on a more similar form to what it looks like on game day. The gradual increase in speed, reflex, and complexity of movement equips players over time to become a tactician with their hands while making it unconscious and reflexive.

This type of training can be implemented in many different ways into a team’s strength and conditioning program. Ignition’s Hand Combat drills can be used as a warm up, incorporated into speed and agility training, or used as a station in circuit training. I encourage the viewers to use whatever pieces of the program fit best with your situation, team, coaching style, etc., and implement them in a fashion that best suits your program. All of the drills are simply meant to provide some effective and repeatable ways to incorporate hand combat training into practice. Hopefully these drills will also spark the coaches and players imagination while thinking slightly outside the box in the development of a skill that is often underutilized in the game of football.

“Absorb what is useful, discard what is not, add what is uniquely your own.” (Bruce Lee)